Coming Out On Top Wiki
Register
Don't have an account?
Sign In
Advertisement
in: Character, Male Character, Romance Option,
and 2 more

Terry Lovelock (real name Terrence) is a popstar and Brofinder date for Mark.

Terrence, most know by his stage name Terry Lovelock, is a popstar. Terry had a humble upbringing, being raised by his single mother alone.

He's very passionate about music and confident of his singing skills. His early musical output, described by himself as "dark" and "weird" didn't bring him commercial success.

Terry leads a very tightly managed life. He has to keep up a happy, approachable and straight persona when in public and is on a fake relationship with fellow musician Dalia Murphy, concocted by their managers, to help further their careers. He is deeply unhappy with the "teenybopper" music he currently puts out as it's carefully crafted by producers to generate easy hits.

Terry has a thin lithe build with dyed platinum blond hair. Terry has bushy, dark brown eyebrow and aquamarine eyes. He has a piercing above his lips, on the left side of his face and both ears pierced.

He wears an orange, blue and dark grey hoodie with headphones around his neck.

Mark can initiate Terry's date on Brofinder. After texting Terry, he replies stressing his desire for discretion and lists various precautions Mark needs to take to meet up with him. 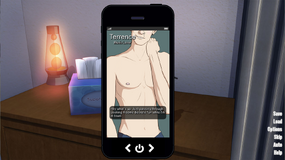 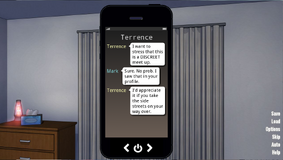 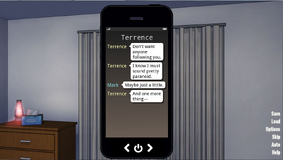 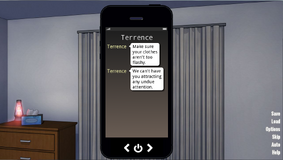 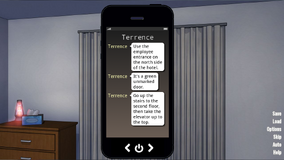 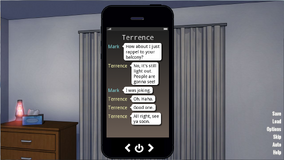 Mark agrees to meet him on the hotel he is staying despite his unusual demands. Mark makes his way to outside of Terry's hotel room only for him to tell Mark he needs to go downstairs and pretend to be named Fred Funt and to act very excited to be meeting him.

A puzzled Mark follows Terry's instructions. He identifies himself as Fred Funt to a bodyguard and is soon swarmed by Terry's fans. Mark continues the charade until Terry walks out id the elevator to properly greet him. It then dawns on Mark that Terry Lovelock, the famous popstar, is the man he contacted on Brofinder. 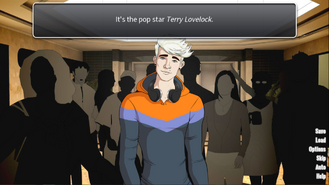 Mark follows Terry to his limousine where Terry explains himself. He was supposed to go on a romantic date with the winner of a contest. However said winner, Fred Funt, turned out to be a stalker. Terry forgot this take-a-fan-on-a-date event would be happening the same evening of his date with Mark and unwilling to cancel or change the date of the event, Terry came up with the Fred Funt cover as last second idea to keep both the date and the event going.

Terry then reveals he's on a fake relationship with female singer Dalia Murphy arranged by their managers. He says he'll have fly to Dalia's birthday party tomorrow for publicity.  Mark starts to understand just how tightly controlled and demanding Terry's life is.

They arrive at fancy sushi joint, Blue Sea, where more of Terry's fans are waiting for them. The boys enter the restaurant  and Mark is surprised to find  out Terry's bodyguard has followed them. They order their food, Mark gets "a little bit of everything" while Terry only eats miso soup. He explains himself, saying he has a photo shoot scheduled for the next day and too much sushi gives him a "tragic rash". Mark excuses himself to the restroom where he is approached by the real Fred Funt. Fred claims he is not a stalker, he is in the business of selling "celebrity souvenirs" to people online. He offers Mark three hundred dollars for a lock of Terry's hair. Upon returning to the table Mark tells Terry about his encounter with Fred.

After the dinner Mark and Terry return to limousine and talk some more. Terry says they're now headed fora party full of music industry people. They pass a giant billboard advertising Terry's latest album which prompts Mark to ask Terry how does he fell about it. Terry goes on a rant about how little control he has over his image and how much he loathes the music he puts out now. He explains that the music he is really interested in is much darker and weirder than the music that's fed him by the label, but that music is not commercial enough to earn a living. Terry admits he chose the popstar life because he was raised poor by his single mother and he values the affluence he has now. He says one his proudest moments was buying a lake-side house for his mother and seeing the her cry of happiness. Mark expresses his sympathy for him.

On a whim Terry decides to skip the industry party and go instead to a bar, only him and Mark. They arrive at a bar, Twangers, where no one recognizes Terry, except for the bartender who is easily fooled by the boys into thinking otherwise. Free from his celebrity for a awhile Terry cuts loose. The boys, drink, sing karaoke and have fun all around. They eventually leave the bar and return to limo. Terry then proposes Mark spend the night with him. The boys return to Terry's hotel room and have sex. Afterwards a lonely Terry asks Mark to stay with him in bed, the cuddle and fall asleep Mark wakes up the next day with Terry getting ready to leave for the airport. Terry bids Mark farewell and promises to see him again if he ever returns to Orlin. Later Mark checks Terry's Instaface account and finds a post about how much fun he had with last night with "Fred" and that he inspired Terry to make a concept album, presumably with the dark, weird sound Terry enjoys.

Terry asks if Mark wants to return to the hotel. [Click to expand]

Terry doesn't want to be alone. [Click to expand]

Alternatively Mark can choose not to tell Terry about his encounter with Fred Funt and cut a lock of Terry's hair after sex. He can either sell it to Fred for three hundred dollars or attempt to sell it himself online. This however does not lead to Terry's best ending.

Community content is available under CC-BY-SA unless otherwise noted.
Advertisement